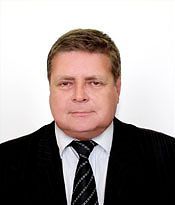 Honorary and Honored Builder of the Russian Federation.

In 1984, he graduated from the Leningrad Institute of Railway Transport Engineers with a degree in Bridges and Tunnels and received a diploma as a Railway Engineer.

2009–2010 - chief specialist of the design department of Transmost OJSC;